If you wish to discuss any matter relating to your child’s academic progress or pastoral well-being please contact your child’s tutor in the first instance. 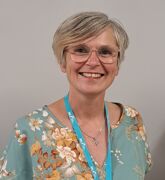 Mrs Henderson started her career as a teacher of Geography 26 years ago, serving the communities in Wiltshire, Coventry and more recently Salisbury. She has worked in senior leadership teams for 16 years, with a passion and leadership in teaching and learning, curriculum and data.

She was a founding senior member of S6C in 2014, setting up a new college in our community. She left her post as Head of College in August 2022, with S6C achieving its highest ever attainment results.

Mrs Henderson is passionate about closing the gap in student disadvantage and working tirelessly to get every student to realise their potential.

Mr Burley began his teaching career in 1999 and started at Wyvern College in 2000 as a teacher of Geography and P.E. He then went on to teach in a number of schools across Wiltshire and Hampshire before becoming Deputy Headteacher at WSE.

Mr Burley is the Curriculum Lead for the school and works on developing our curriculum to enable students to become the best version of themselves. Mr Burley is also responsible for Pupil Premium and collaboration with Salisbury 6th Form College.

Prior to working in education, Mrs Smith worked for Next, Cadbury’s and Cancer Research UK. She joined St Edmund’s in 2001 working as a teaching assistant. Mrs Smith began teaching in 2006 and later became Head of House and Head of History before joining the senior leadership team in 2013.

Mr Adams started teaching maths in Brighton in 2004 following 10 years working in London. Before he became a teacher, Mr Adams worked as an economist and then an IT consultant. In his teaching career Mr Adams has been a Head of Maths and a director of assessment as well as teaching maths and computer science.

Mr Adams is responsible for Assessment and Reporting, which includes the production of clear outcomes data and reporting to parents. He is also Head of Avon House and Data Lead for Magna Learning Partnership.

Ms Bellamy began her teaching career in 1999. She taught in France, Scotland, Germany and Yorkshire before joining Wyvern College in 2010 as SENCO/Head of French before joining the senior leadership team in 2015.

Ms Bellamy is responsible for leading on the personal development of students including careers, enrichment, trips, Personal Development Days and Activities Week. She is also Head of Bourne House.

Before teaching, Mrs Evans was a management consultant and enjoyed working with a variety of different people from over 20 countries.  She also spent five years working for England Netball as their Regional Manager has also been a netball player, talent scout, umpire and coach.

After becoming a teacher, Mrs Evans was Head of Science at a school in Hampshire and when she joined St Edmund’s in 2016.  Mrs Evans joined WSE's senior team as Assistant Headteacher in 2021.

Mrs Evans is responsible for the strategic development of whole school continuous professional development to enable staff and the students they teach to thrive. She is also Head of Ebble House.

Before Mr Hunt became a teacher he worked as a store Manager for HobbyCraft.  Mr Hunt began his teaching career at Wyvern College alongside Mr Burley in 2000 as a teacher of Geography and ICT. He has held a number of positions at the school and is now Assistant Headteacher.

Mrs Lee began teaching in Suffolk in 2007 before moving to London and then returning to Salisbury. She joined St Edmund's in 2016 as Head of English before being appointed as Assistant Headteacher for WSE in 2021.

Mrs Lee is responsible for developing the teaching and learning strategy for the school, including the monitoring of classroom practice. She is also a Visiting Fellow and the Head of Wylye House.

Mr Martin began teaching history at St Edmund’s in 2009. Since this time, he has been a Head of department, Head of House and Head of Year. He was once caught in a hurricane on a school trip!

Mr Martin is responsible for the creation of the school timetable including curriculum choices and exams procedures. He is also Head of Nadder House.

Mr Newell has been teaching since 2005 and joined Wyvern St Edmund's in 2018.  Mr Newell has worked in a range of education establishments from private, mainstream and SEND schools with a wide range of responsibilities.  Mr Newell is also a swimming teacher and a RLSS Trainer Assessor for lifeguarding and First Aid.

Mr Newell brings his wealth of experience to his role as Assistant Head with responsibility for leading on our Behaviour Systems at WSE.

If you wish to discuss any matter relating to your child’s academic progress or pastoral well-being please contact your child’s tutor in the first instance.